Daech: from the military routed to the political defeat, what route?

Daech: from the military routed to the political defeat, what route?

To see the videos

The military defeat of the Islamic State Organization (OEI) in Iraq and Syria cannot be equated with the project of the most powerful of the contemporary jihadist organizations. Strictly military, acquired only at the cost of a massive imbalance in the ratio of forces, the victories won in Mosul, Raqqa or elsewhere in Iraq and Syria, are they not likely to have only scattered in space and/or postponed in the time the problems that Russia, the United States, Europe and Iran, allies of fallen regimes, have failed to find a lasting solution?

The OEI supporters are now territorially anchored in several conflicting fora (Libya, Yemen, Sinai, etc.). And the democratic counter-performances of regimes that alone allowed them to establish themselves elsewhere than on the “extremes” of societies are still far from the past. While the territorial base of the jihadist project can be considered to be very diminished, it suggests that its ideology remains attractive both in Oriental theatre and in some fringe of the Muslim population of Europe.

Are the tools, essentially safe and repressive, mobilised for the time being by the States, including France, equal to the objectives of the “deradicalisation” expected? What about trade policies (arms sales to Egypt and Arabia in particular) in the light of the assertion of the values claimed by the “fight against terrorism”? What strategies remain to be invested, at the cost of what aggiornamento of the understanding of the roots of terrorism, will we be able to make the purposeful military defeat of Daech a definitive political disroute?

It is to these questions that this symposium will try to provide answers.

The State of play of the Eastern theatre of terrorism 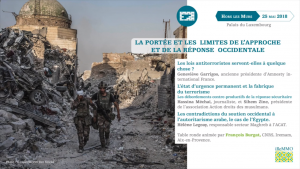 Ziad Majed, Professor at the American University of Paris: the Syro-Iraqi factory of terrorism.

Philippe Gunet, former military attaché in Yemen, Member of the Orient XXI: the United Arab Emirates and the hunt for Islamists.

Xavier Guignard, partner of the ifpo: the contradictions of the fight against terrorism in the light of the Israeli-Palestinian conflict.

Debate with the public

The scope and limits of the Western approach and response

Hassina Méchai, journalist, and Sihem zine, President of the Association action rights of Muslims: the State of permanent emergency and the factory of terrorism (the counter-productive overflows of the response safe and secure)

Hélène Legeay, head of the Maghreb sector at ACAT: the contradictions of Western support for Arab authoritarianism, the case of Egypt.

Debate with the public